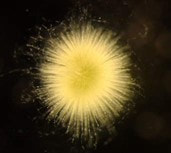 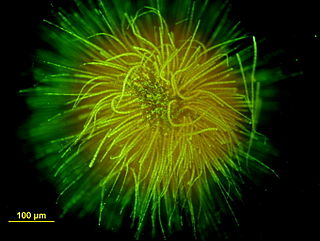 The photo shows a highly magnified single gloeo colony. Observed in the water, gloeo colonies appear to be the size of the head of a small pin.

Gloeotrichia (pronounced “glee-oh-tricky-ah”) echinulata is a colonial bluegreen algae that forms tiny spheres, which can be seen without magnification in lake water. “Gloeo” has been known to exist in Maine lakes for over 100 years.  It has typically been observed in late summer, in relatively low densities.  However, during the past decade, gloeo appears to have been on the increase in lakes throughout much of New England. Gloeo blooms have occurred earlier in the summer, and in higher densities. Research on the life cycle of this alga has suggested that gloeo may play a role in declining water quality of otherwise clear, low nutrient lakes.  It is a species of concern for lake managers, as it has been shown to push lakes towards eutrophication and produce deadly toxins.  PPA partnered with Bates Professor Holly Ewing to monitor gloeo at several sites on the lake from 2011 - 2019.  The study has ended for now, but it is becoming clear that the more phosphorus released by the bottom sediments, the more nutrients available for the phosphorus hungry gloeo.
Factors that Affect Gloeo Abundance:Researchers are concerned that Gloeo may be increasing nutrient levels and algae growth within lakes by moving phosphorus from the bottom of the lake up into the water column, where it can be used by other algae. Gloeo blooms are generally short-lived, lasting only about 2 weeks in late July and early August. Smaller amounts of the algae can be seen in early July and persist into September. Anecdotal reports indicate an increase in Gloeo abundance within New England over the last decade or two. While it has always been a part of the algae community in many lakes, increasing temperatures due to climate change may be accelerating growth.