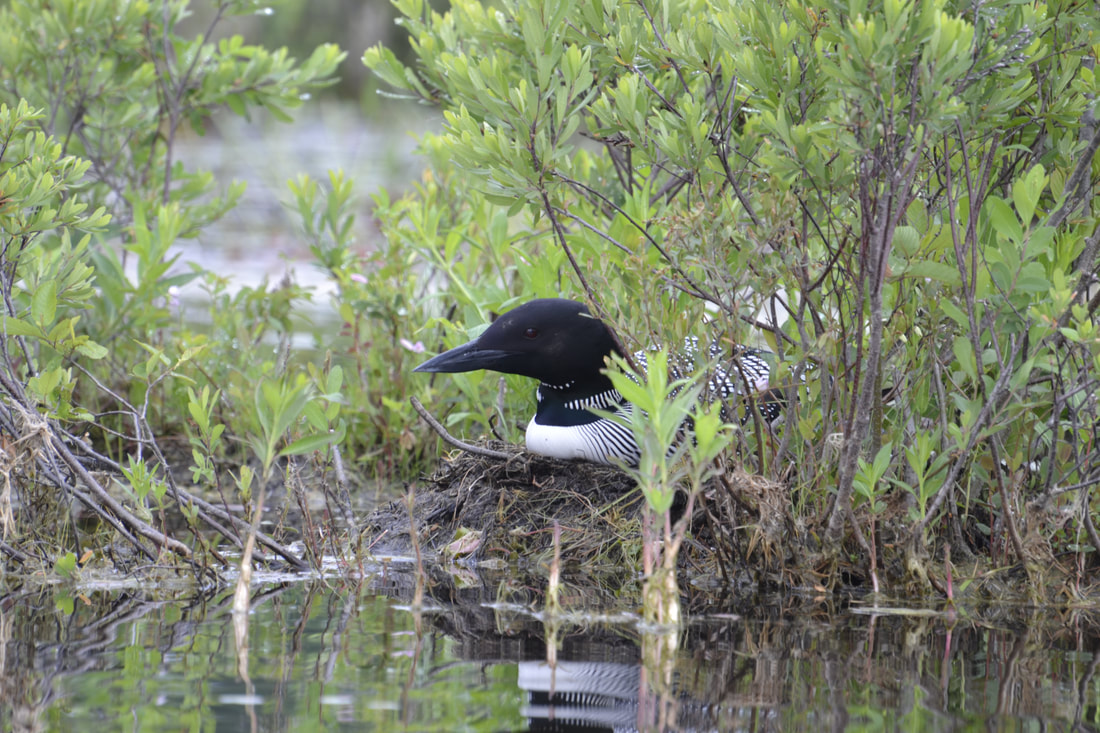 Dam report:  Bob Harmon reported on the status of the Mill St Dam.  The project is going forward as a repair.  The design and timing of the dam is still uncertain.  It has been proposed that a coffer dam will be installed while the dam is being repaired.  State Senator Jessica Fay spoke about her efforts to secure funding for the project.  PPA is very grateful for her help.
Bob also showed the dam level data for the year.  The target level is 280.5 feet above sea level, and that level as been maintained fairly consistently throughout the summer.
Loon Count:  Maine Audubon loon count volunteers found 7 loons and 1 chick on Panther Pond this year.

Hazard Buoys – Tommy Dutton continues to place hazard buoys on the lake following state guidelines.  A map of the placement of buoys was shown.

Invasive Plants – Sibyl French, coordinator of the PPippers survey team, spoke about the need for continued vigilance in spotting invasive aquatic plants.  Boats should be checked when entering and leaving the lake.  Eurasian milfoil was spotted on an outgoing boat from Panther Pond, but it is thought the plant probably came from Lake Champlain.

Water Quality and Monitoring – Peter reported on the current oxygen and Secchi disk reading.  Secchi disk reading continue to show excellent readings.  Oxygen levels in late August in previous years have shown very low oxygen readings (anoxia), problematic for fish and other organisms.  During anoxia, phosphorus is released from the sediment and contributes to algal growth.  Phosphorus monitoring will be started to determine how this cycle is working on the lake.
Wayne Durr and Jean Miller, newly state phosphorus certified, have started to test phosphorus this summer.

History of Panther Pond and it’s association:
President Harry Loring recognized previous founding fathers of the organization and read a recent letter from past president Ben Severn.  The letter has been added to the end of this report.
The following people spoke about the history of their camps:
Camp Hinds – Dean Zaharis
Camp Timanous – David Suitor
Slovenski Camps – Peter Slovenski
Sharing Some Pond Memories – Group

Peter Slovenski made an announcement important for those looking for a place to launch or remove a boat.  He announced for a fee of $30, you can now launch your boat at the beach by his cottages at his camp Saturdays before and after cottage season, June 11 to Labor Day. Contact Peter at  peter.slovenski@gmail.com for an appointment.  The fee will include both the launch and removal of a boat.

Letter from Ben,
Hi to you all,

I obviously wish I could be there tomorrow.  But at 83, while nothing serious, some repairs could not be postponed any longer,  COVID raised havoc with everyone’s schedule.

I did find a note from Wendy Garland of DEP and it brought to mind a few things.

Obviously, Do with it as you see fit.

I hope there will be information that indicates how critical Wendy Garland and the Lady that I ashamedly can’t remember from Cumberland County Soil and Water Conservation District were in helping a fledging group of Panther Ponders figure out how to create PPA and how to establish a purpose beyond getting people along Panther Run to act more responsibly and get it done a whole year earlier than normally was done.  And then there is Noralee Raymond who became the key for a number of years that led to two Conservation Projects.  Their contribution to the early years of PPA were critical to the ultimate success of PPA.  Never to be forgotten of course, is the group of people around Panther Pond who stepped up to the plate and made sure that we would overcome some organizational blurps and continue to get the work done.

Who would have ever thought of creating a bunch of Peepers, dividing the shore line into sections so any Tom or Mary with a bit of training especially from—you know who from Auburn—that brought their containers of plants for us to learn to recognize plants:  And  ultimately for the Peepers to recognize what looked different from the previous year that could then be brought to ( often to my porch) so the real experts like Sybil and Bunny could determine if they were a threat or not.

One point, for a number of years the Town published The Raymond Roadrunner.  I think it must have been a monthly, not a weekly.  But the point is, we were able to publish all kinds of articles and pictures on PPA, RWPA and the environment.  It allowed us to express our selves openly and engage the Town folks.  Social media hadnt become as prevalent as it is today.  It was an important asset to our work on protecting  the environment.

A second point:  One of my favorite memories is sitting at the Cox’s dining table for a PPA meeting.  One of the things we were struggling with was to create a more poignant or catchy phrase that would capture PPA’s purpose.   As I remember, Marie Connolly had just joined the board.  There was some discussion of ideas, and for me, out of the blue came this phrase from Marie:  “Preserving Panther Pond One Person at a Time”

It captured exactly the issue we had struggled with: how to distinguish PPA from RWPA. It gave us a vision of what PPA would become.

I realize that this next paragraph is rather personal, not just for me, but for those who worked with Noralee.  I found  a 2012 email from Wendy Garland asking for my contribution to a piece that she was preparing to put in the brochure for the Phase II Conservation Project to acknowledge Noralee’s contribution.  Peggy Jensen apparently suggested the inclusion of acknowledgement in the brochure.

From my perspective, Noralee Raymond was the real key to the success in the critical first five years.  Unfortunately, her health failed her, but we got thru it.  But I would hope that her contribution is recognized by the members.  It was a difficult time, I remember well sitting with Noralee at her Laptop in John Rand’s mother’s home with Noralee’s Dad and stepmom at her side when I quietly took her hands off of the keyboard and told her that she needed to rest.  It obviously will forever be etched in my memory.

Finally, it probably is better that I am not there this year, because it might just have been too emotional for me.   So many memories I am sure would have popped into my mind of the joy my wife Sandi and I felt being a part of Panther Pond and Kings Grant Association.  And as women do,  a lot of her friends would say something about how much they loved Sandi.  While I am enjoying my new home in Virginia in Ashby Ponds senior retirement development with all kinds of things to do and within 30 minutes of my darling daughter and her family, there are moments when I wish I were still sitting on the porch at sunset.

Finally, PPA was my almost full time volunteer work for 8 years.  In 2010 or so a PPA member came up to me and said that he really liked my wonderful association.  I looked at him and said something to the effect:  “This is not MY association.  It is OURS”. I knew then that if was time to step down and let other well qualified people become The President.