Dave Plummer above and his cousin below in 1929 preparing to cut ice from the lake to use as refrigeration at Camp Hawthorne during the following summer. 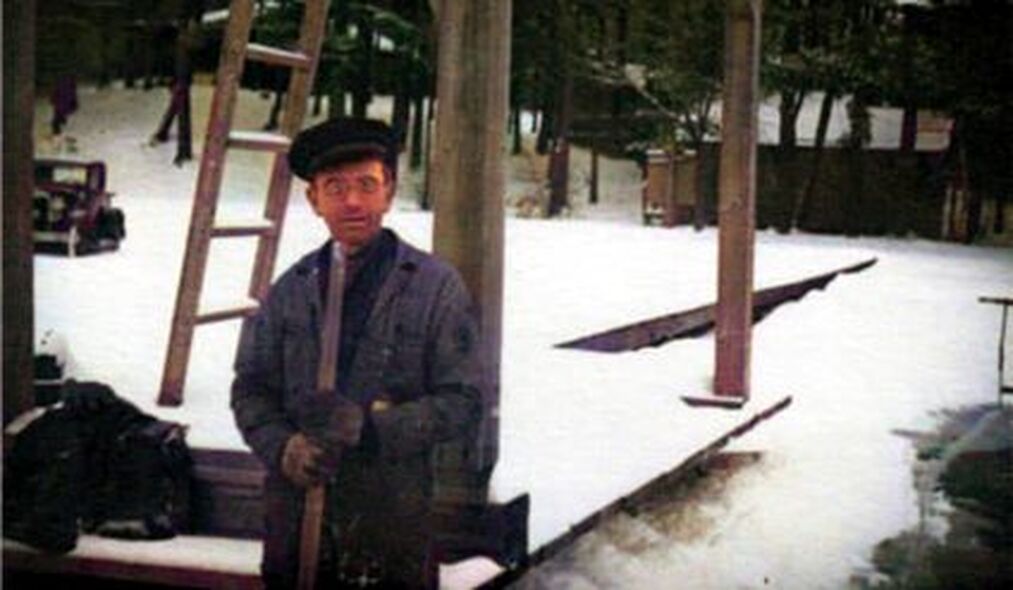 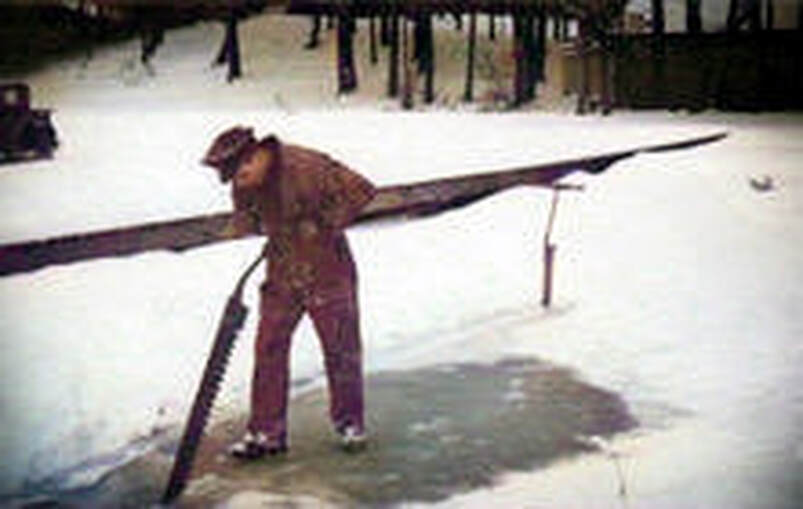 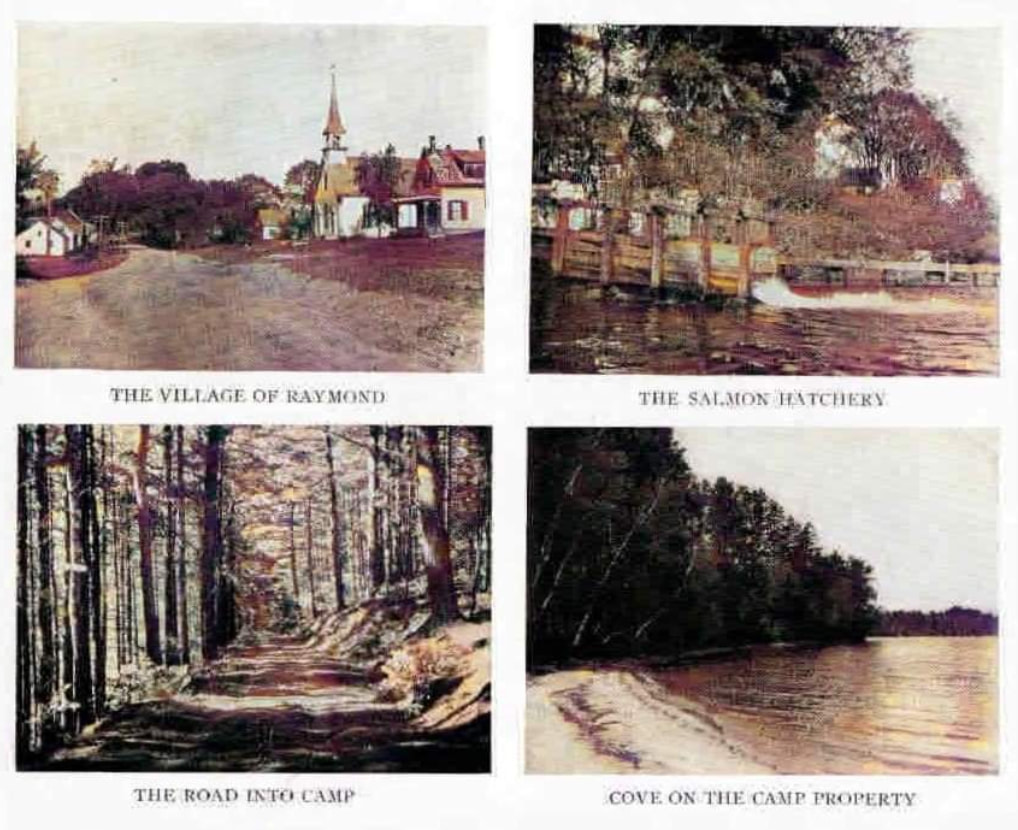 Road into and cove property of Camp Hawthorne. 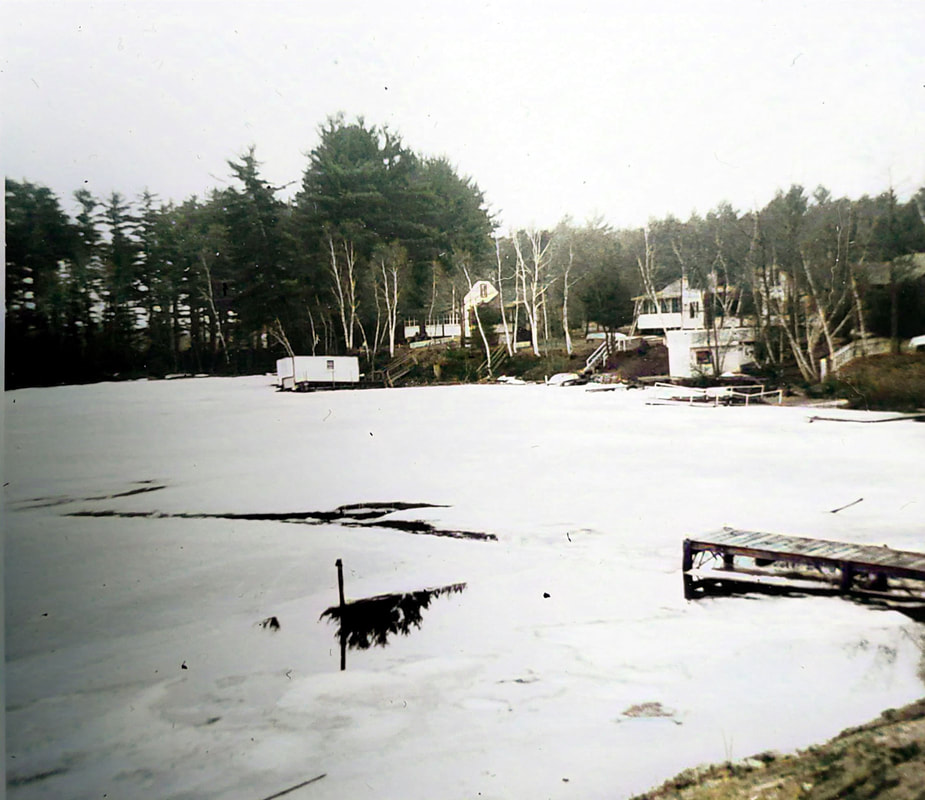 Boulder Road looking into the Plummerville Cove in the 1950's. 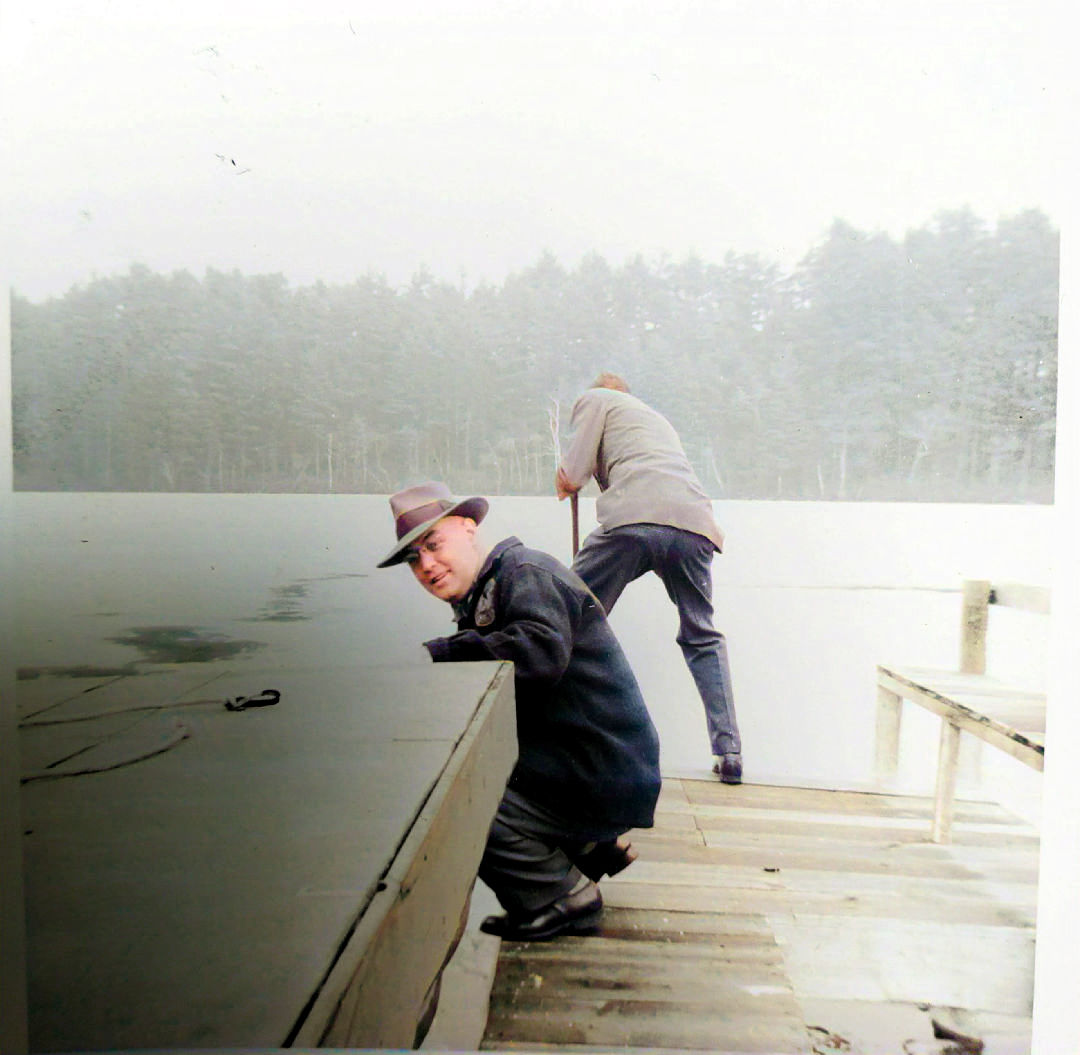 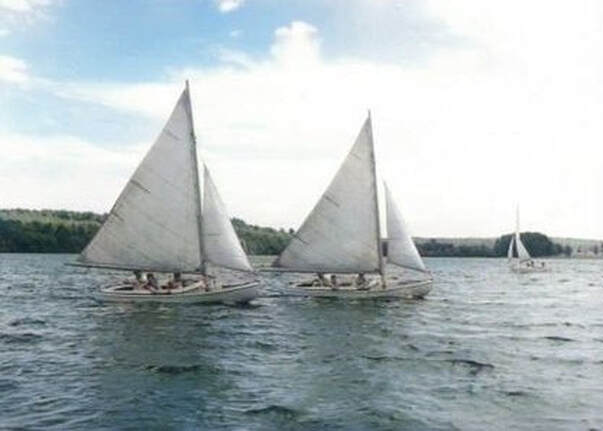 Cape Cod Nimblet sailboats purchased from Camp Wohelo by Camp Hawthorne sailing on the pond in the 1950's. 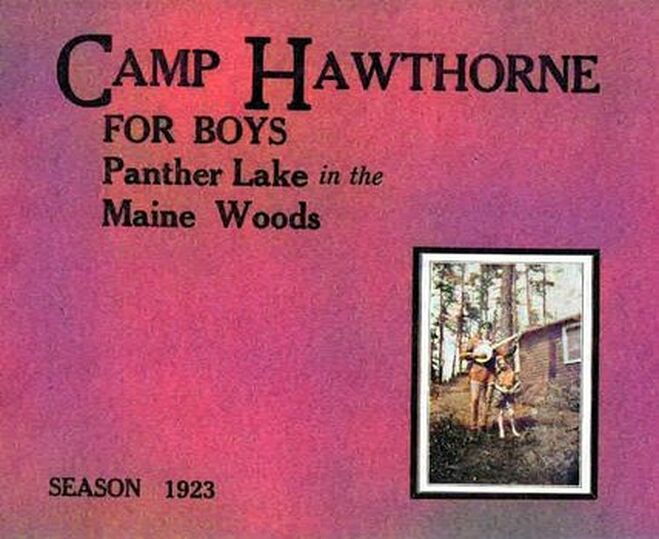 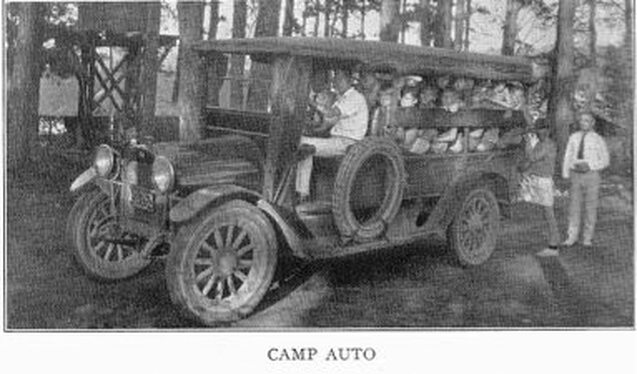 Camp Hawthorne campers head to Timanous in the 1930's. 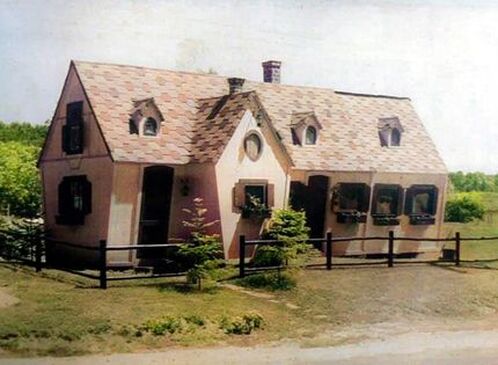 The House that Jack Built shortly after he built it. 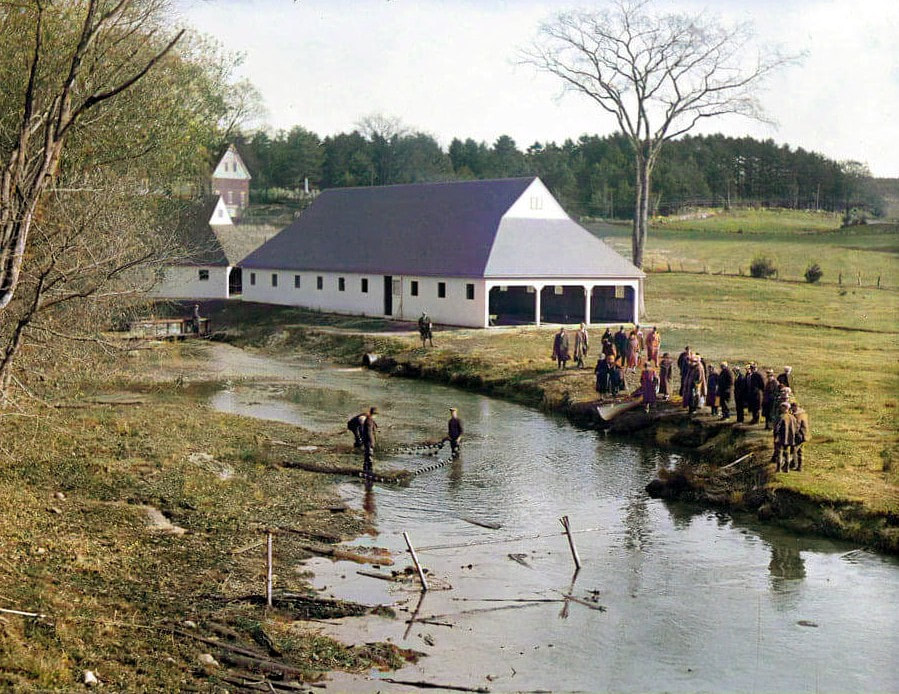 The Raymond Fish Hatchery with David T Plummer's brick barn, the village cemetery and Stanley Leach's field in the background. 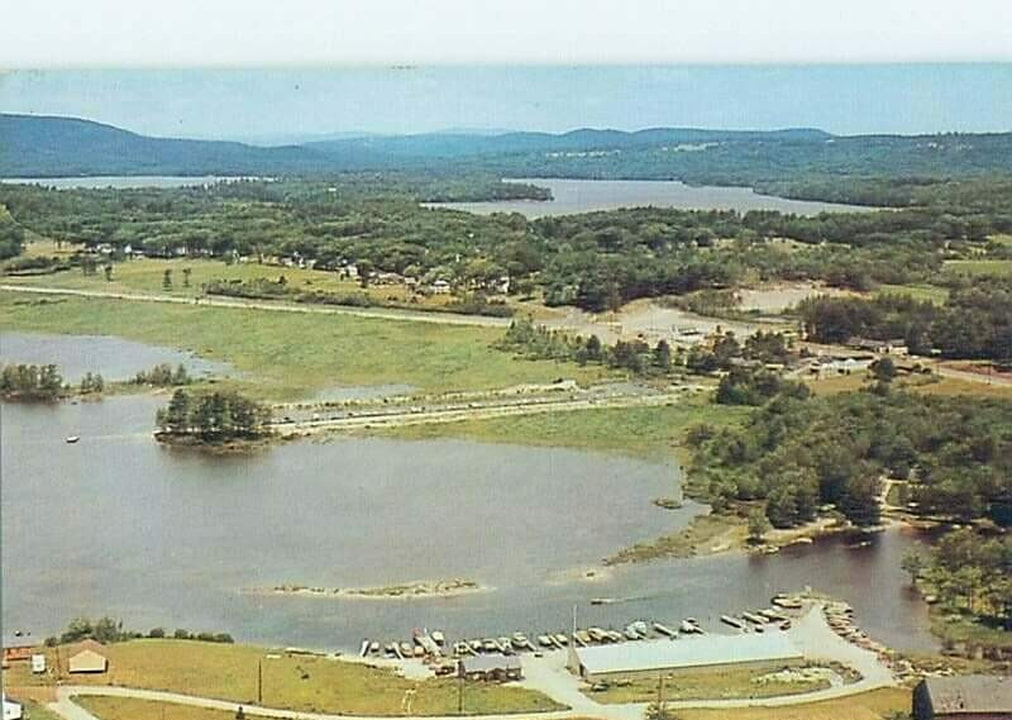 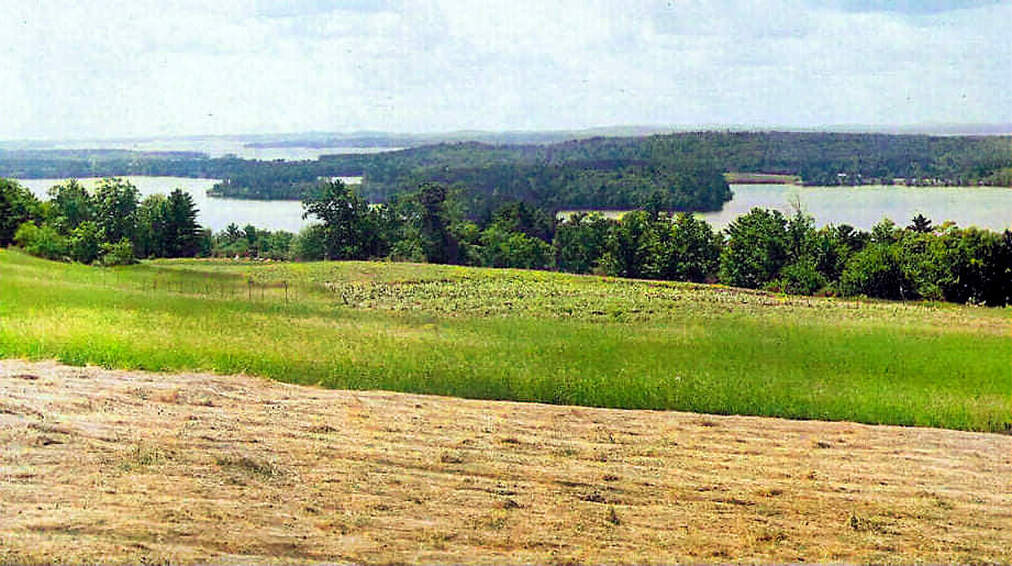 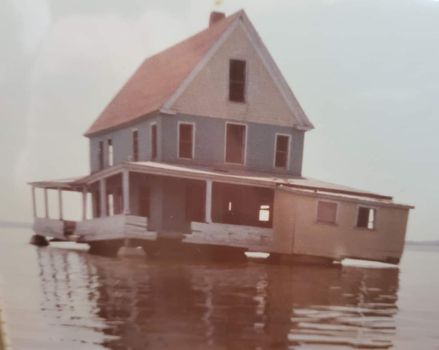 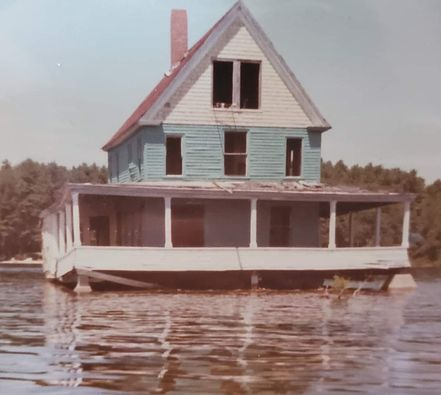 House that sat in Sebago Lake off Route 302. 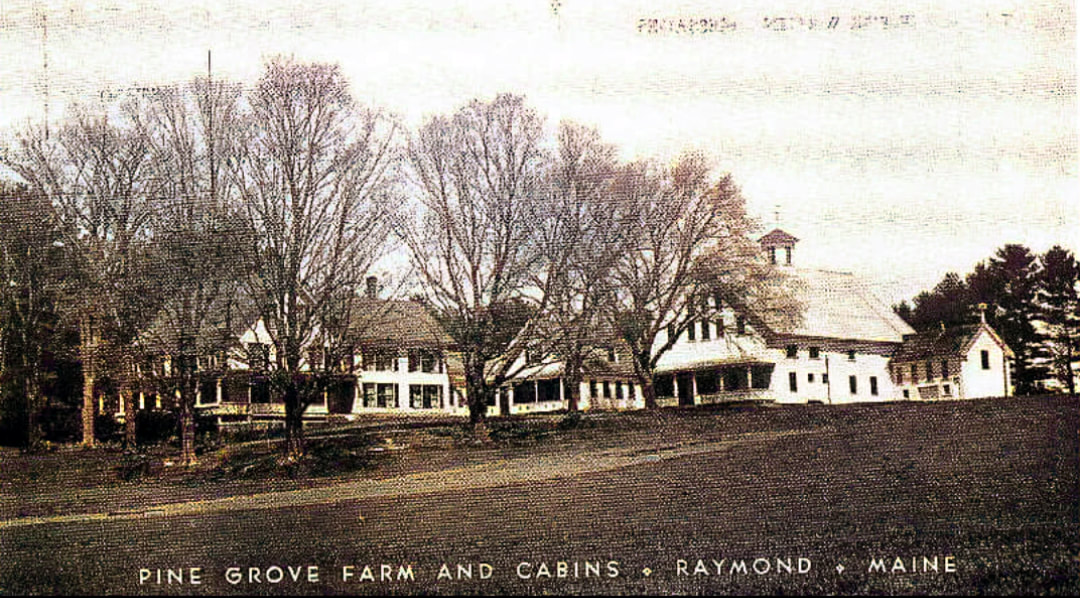 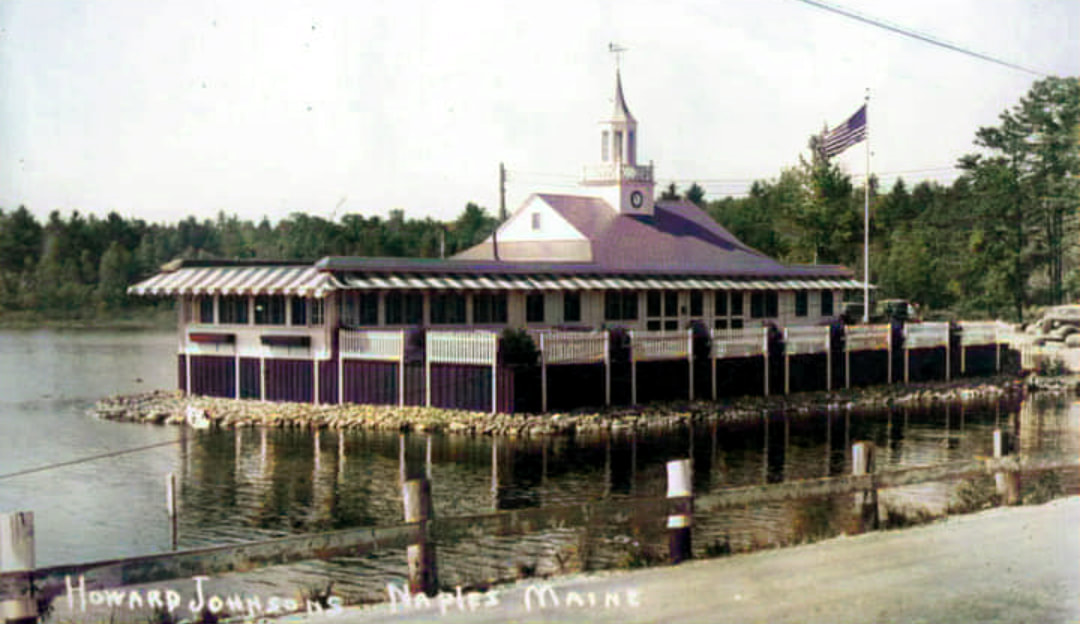 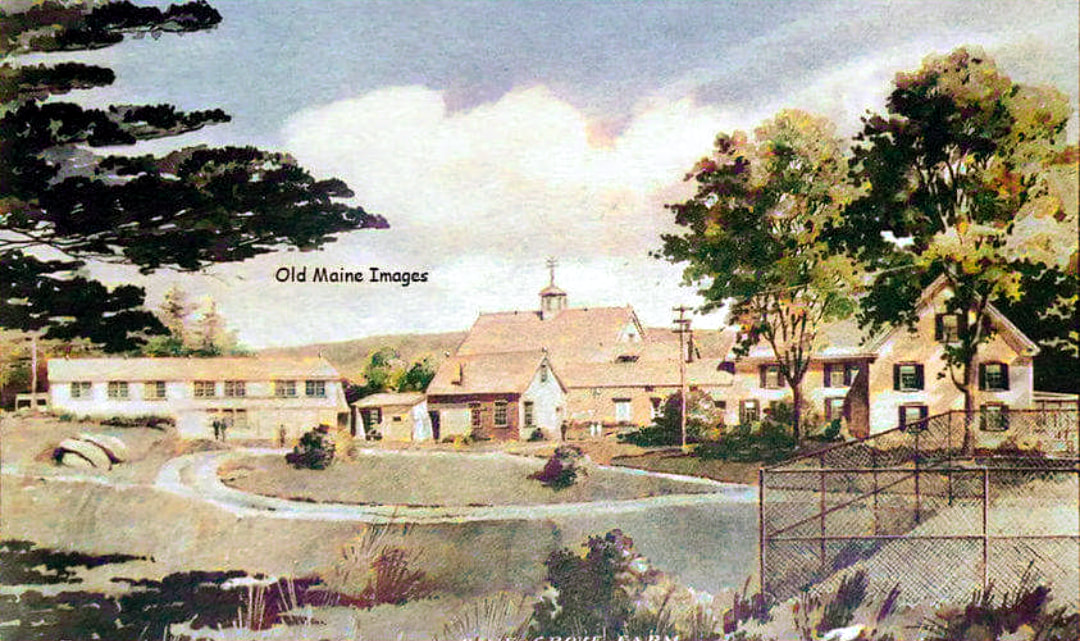 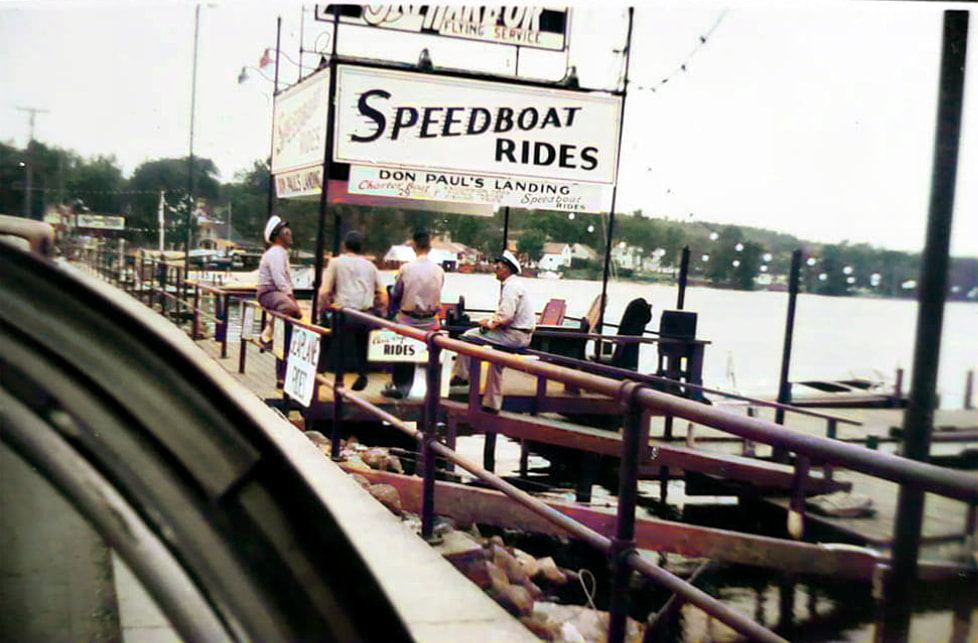 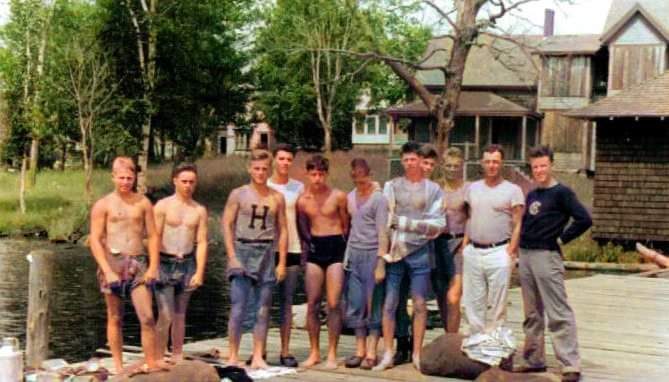 Camp Hawthorne campers and staff on a 1938 trip to the Rangely Lakes.  Dave Plummer is second from right.  The letter below is from a German camper, invited to camp on a scholarship by then camp director Major Bigelow.  He sent the letter to Dave Plummer and included the photo. 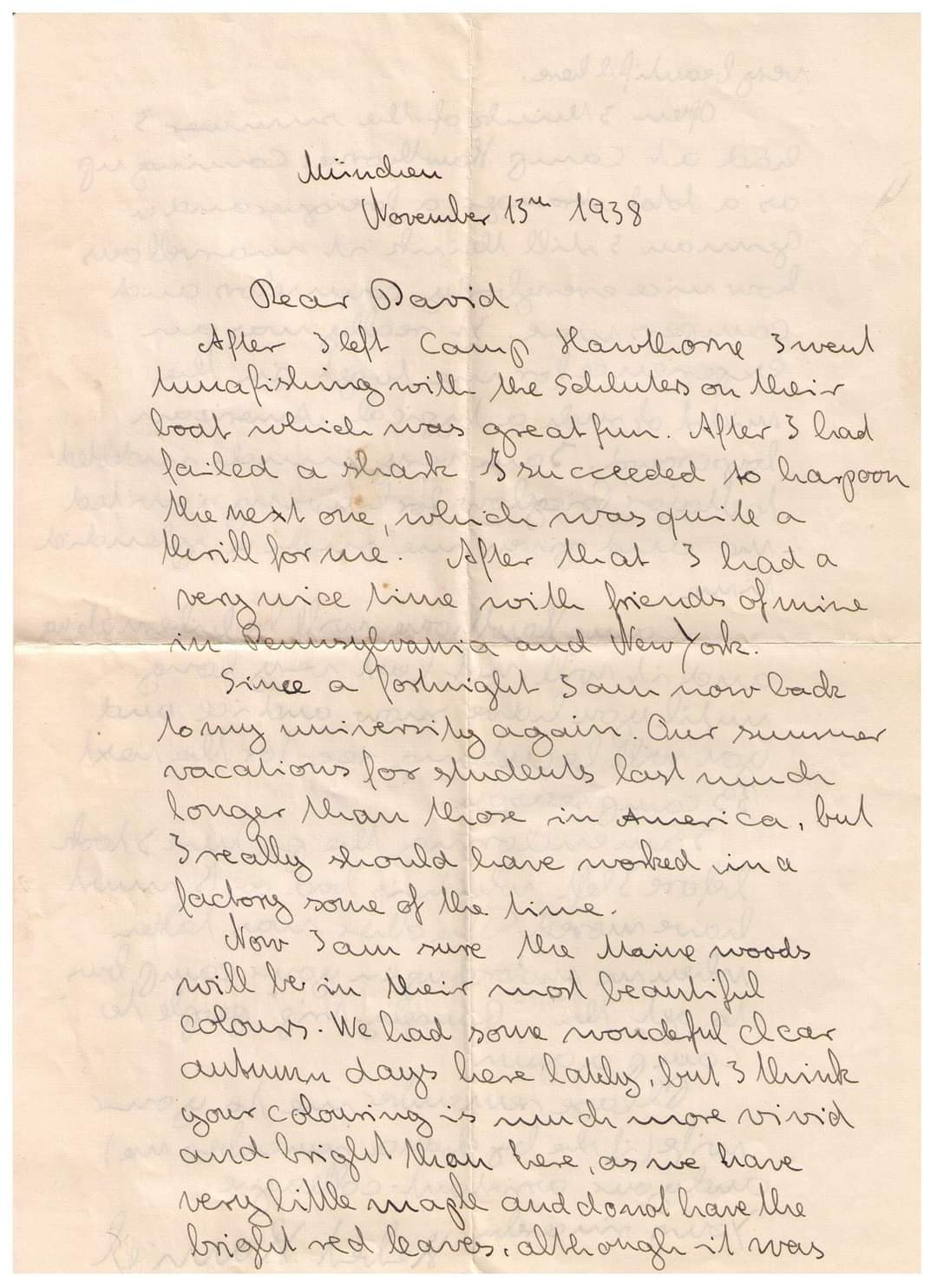 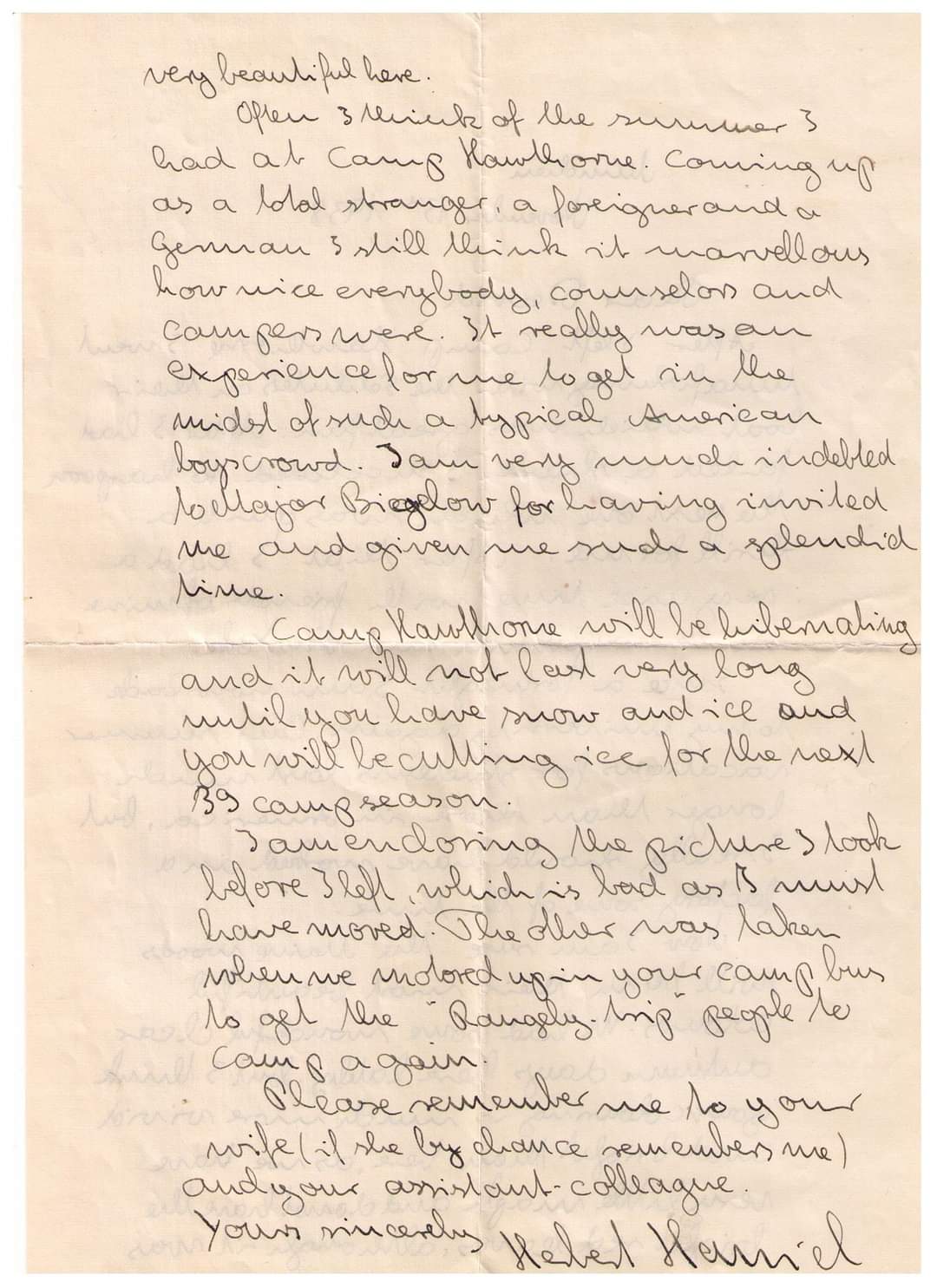 A November 13, 1938 letter from a German Camp Hawthorne camper to Dave Plummer. A note on the back of the letter from Alice Plummer says, 'Picture taken by the German boy - killed in WWII.'

Dear David, After I left Camp Hawthorne I went tuna fishing with the Schilutes on their boat which was great fun.  After I had failed a shark, I succeeded to harpoon the next one which was quite a thrill for me.  After that I had a very nice time with friends of mine in PA and NY.

Since a fortnight I am now back to my university again. Our summer vacations for students last much longer than the one in America, but I really should have worked in a factory some of the time.

Now I am sure the Maine woods will be in their most beautiful colors.  We had some wonderful clear autumn days here lately but I think your coloring is much more vivid and bright than here, as we have very little maple and do not have the bright red leaves, although it was very beautiful here.

Often I think of the summer I had at Camp Hawthorne.  Coming up as a total stranger, a foreigner and a German, I still think it marvelous how nice everybody, counselors and campers were.  It really was an experience for me to get in the middle of such a typical American boys' crowd.  I am  very much indebted to Major Bigelow for having invited me and given me such a splendid time.

Camp Hawthorne will be hibernating and it will not last very long until you have snow  and ice and you will be culling ice for the next '39 camp season.

I am enclosing the picture I took before I left, which is bad as I must have moved.  The other was taken when we motored up in your camp bus to get the 'Rangely trip' people to camp again.

Please remember me to your wife (if she by chance remembers me) and your assistant colleague. Yours sincerely, Herbert Hummel 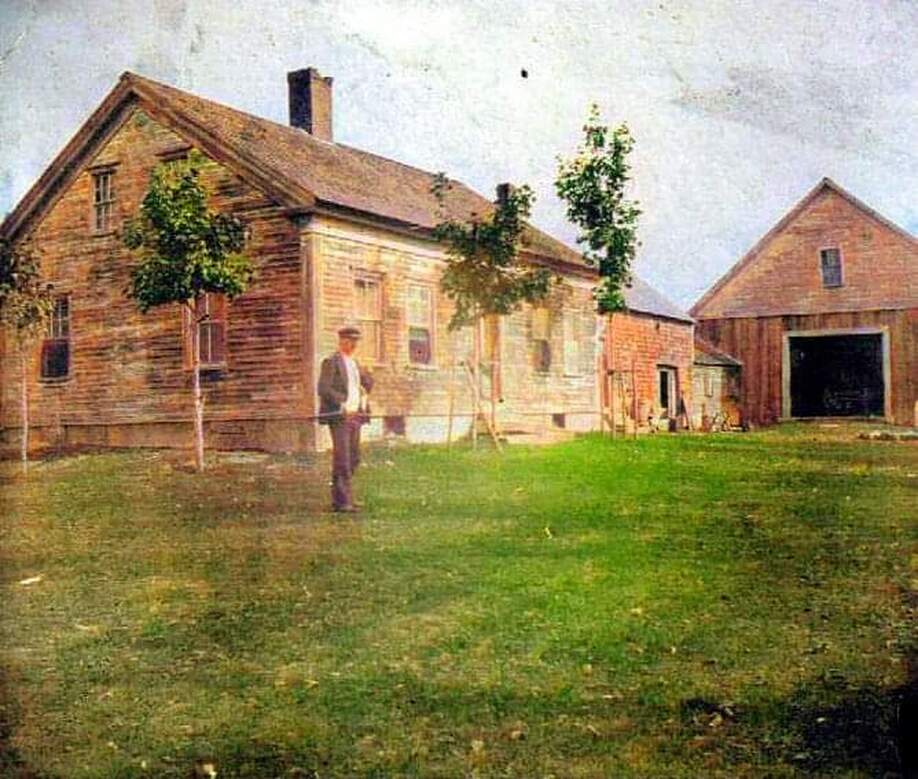 The homestead and barn on Betty's Neck in the early 1900's. 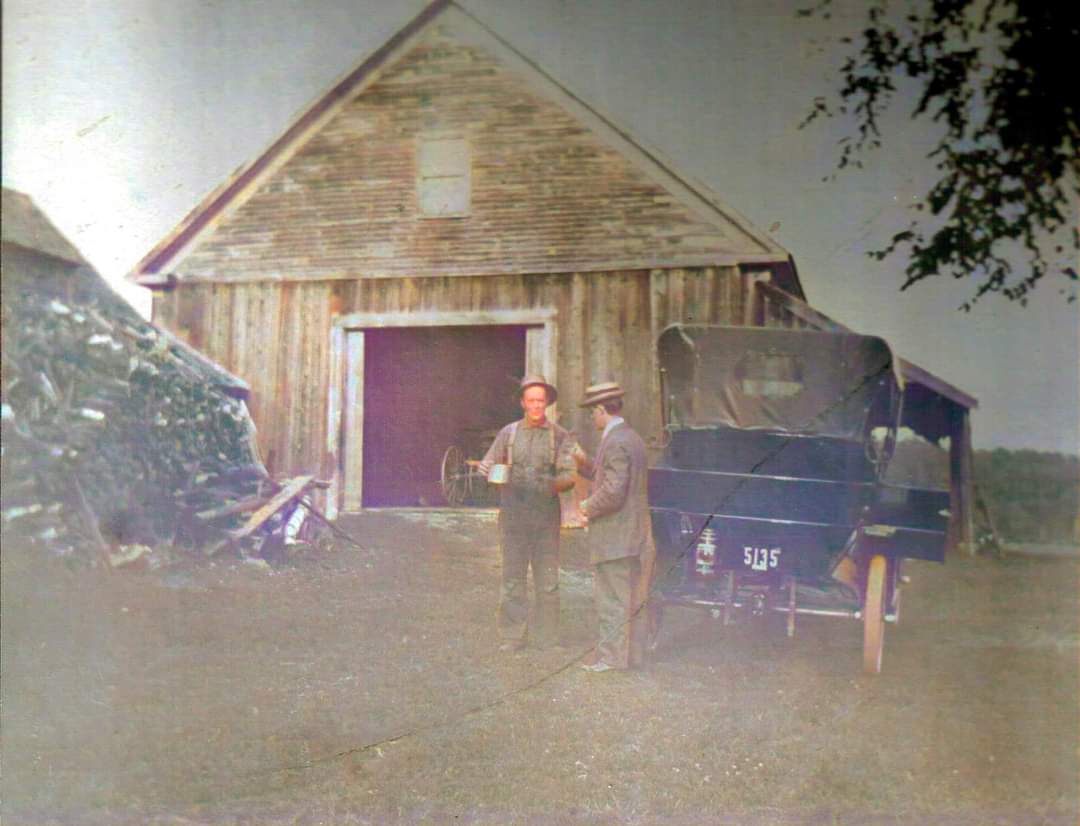 Another view of the barn on Betty's Neck in the early 1900's. 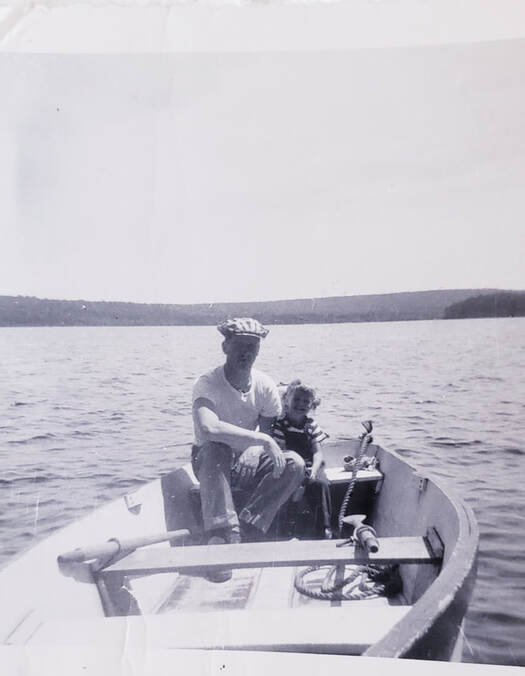 Portland Mayor Harold Loring with his daughter Carol in the 1950's. 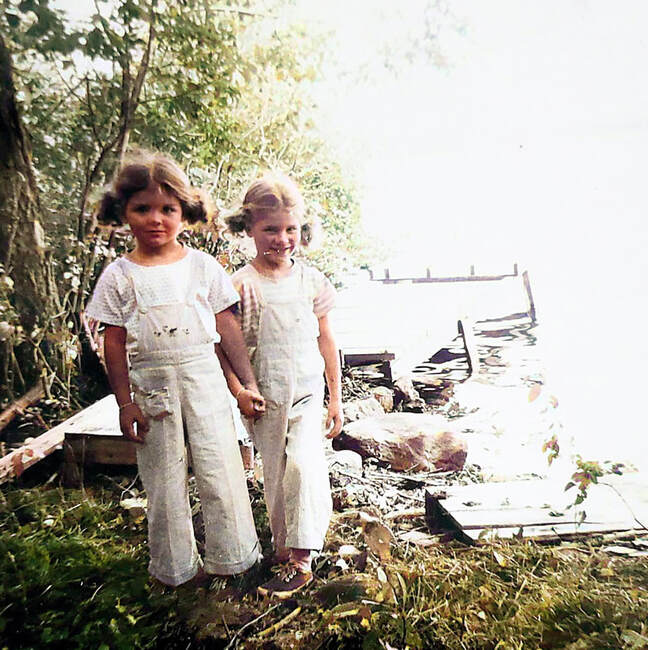 Carol and Roberta Loring on Panther Pond in the 1950's.