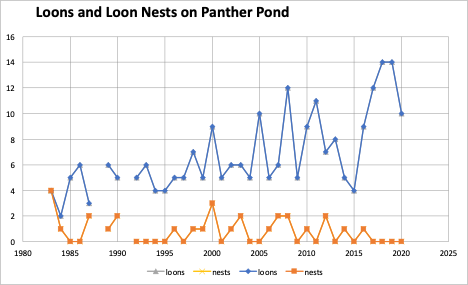 On the third Saturday of July, over 1,000 volunteers head out to Maine’s lakes to count loons.  Sponsored by Maine’s Audubon Society, the volunteers provide scientists with valuable data about Maine’s loon population. In the 2020 count, Maine Audubon estimated a population of 2,974 adult Common Loons and 414 chicks for the southern half of Maine.  For adult loons, this is 154 fewer than last year and 295 fewer than 2018.  These numbers are nearly double the population estimated when the count began over 30 years ago.  Based on these numbers, Maine has a robust population of adult loons, the largest in the Northeast.  The loon chick count is up from 372 estimated last year and about equal to the 2018 estimate.

The Department of Inland Fisheries and Wildlife (DIFW) report that lead poisoning still accounts for 18% of adult loon deaths despite a statewide ban on the sale and use of certain lead sinkers and bare lead-headed jogs.  Trauma, primarily from boat collisions, accounts for 29% of all adult loon deaths, surpassing lead poisoning as the overall leading cause of death for adult loons.  Loons also are dealing with new and ongoing threats, such as fungal respiratory disease, that accounted for 21% of deaths in the DIFW study and the varied impacts of climate change on loon productivity and mortality.  Despite these threats to the loon population, Maine’s loon population continues to thrive.

Fascinating Notes on Loons from Jim Paruk - Center for Loon Conservation, Biodiversity Research Institute -notes from a talk given in Raymond, Maine August 29, 2012
Loons are known as being clumsy. In Europe they are known for being divers. Loons breed in arboreal forests. As soon as ice leaves lakes and ponds, loons return to the territory they know. They return singly, sometimes resuming a partnership from the previous season, sometimes partnering with a new loon. Courtship is not elaborate. Loons will defend their territory even to death. They nest sometime in June, preferring islands as nest sites. They usually lay 2 olive green eggs. A sitting loon will lower its head when disturbed while on its nest. Raccoons, skunks, minks, gulls, ravens, and crows are all predators. If the first nest fails, loons will nest again within 2 weeks. Eggs in second nest attempts are likely to be smaller. Loon siblings can be aggressive. The larger can kill the younger hatchling. For the first two weeks, hatchlings are vulnerable to predation from eagles, pike, trout, and snapping turtles. In the first week, they are brownish and black, the second week they are mostly brown. In the third week the baby loons can ride on parents’ backs. In the fourth week they are still fluffy. By the fifth week they are showing gray feathers. After about 6 weeks the parent loons feel the babies are safe enough to leave briefly while the parent s fish. By the twelfth week the baby loons can fly and are on their own. In August, loons start to gather. As September passes, the gatherings get larger. They start to migrate to the ocean in small flocks. The loon pairs do not stay together during migration. The older loons leave first. Later the year’s crop of baby loons leave. By December loons have changed to their brownish winter plumage. Most of us don’t recognize loons in their winter coloration when we see them on the ocean. Maine loons winter along the coast, mostly off Massachusetts. Some go further south to Virginia, the Carolinas, and Florida. From January through March, loons are flightless while they replace their wing feathers. They forage in large flocks, eating crabs and shrimp. Researchers have determined that the striped ‘necklace’ sends other loons a message about the individual’s dominance. The black markings are useful as a message about defending territory and also to attract mates. The breeding plumage, bold black and white, sends a visual message over a long distance that ‘ loons are here, this territory is occupied’. The loon wail communicates ‘I’m here, where are you’. The tremolo or laugh communicates stress. Hoots are used as calls or contacts with other loons. The yodel is used only by male loons and signals distress. Loons can dive for 4 minutes and can dive more than 250 feet deep. Loons have wings about 20% shorter than other birds of their body size, making them streamlined swimmers, but they need 200 yards for takeoff. They fly with constant flapping, at about 70-80mph, and can make 6-8 hour flights. Loons have large, heavy heads and dense, solid bones. They use their feet for propulsion in the water. They have a narrow wish bone and narrow hips. Their leg bones are thin and flat, their toes elongated. Their leg bones have a larger than usual surface for attaching to the body. Loons rotate their legs 90 degrees on recovery when swimming, and have 270 degree flexibility. Loon legs function like human shoulders. Jim studied loons when he was a student. More than 4000 loons were banded in 22 states and 7 provinces. These studies found that 80% of loons return each year to their home lake. Some pairs reunite, some divorce, some desert, some get chased away, some are pre-empted by earlier arrivals. Loons have greater allegiance to their territory than to their mates. Male loons are very aggressive competitors for territory. They fight with challengers, wounding or killing with puncture wounds to the chest. The oldest banded loon is 24 years old Probably the average life span for loons is 20-30 years. Studies observing nesting behavior reveal that females will stay on the nest for about 41/2 hours, though the range was ½ hour to 11 hours. Males spend less time on the nest. Males spend more time carrying the babies during the first two weeks when the babies are vulnerable to predators. Females deliver more food to the babies in the first two weeks. The food is 80% fish and 20% invertebrates. Males and females have equal ability to forage. In the pairs studied, males were 25% larger by weight and had 4% larger bills than females. This may support the males as defenders of their territory. Loons breeding in areas closer to the ocean are heavier, with bigger feet than those who breed farther inland. The average adult loon weight in Maine is about 16 pounds. It takes loons about 6 years to acquire a nesting territory, usually within a mile of their own hatching site. The range was 3-11 years. Loon pairs spend an average of 5 years together. The longest studied pair spent 9 years together. If a female loon is chased from her territory she will not breed nearby. A 60 acre lake will support 1 pair. A 300 acre lake will support 2 pairs. A 75,000 acre lake will support 50 pairs. Loons will defend their nest areas and their forage areas. Resident male loons do not tolerate single male loons on the loose. Loons are related to petrels and penguins. Large male loons have deep voices. Loons recognize neighbor loons. Loons appear to recognize unstable pairs of loons. Loons waggle a foot in the air sometimes when preening. They waggle more on sunny days, possibly cooling their bodies. 75% of loons waggle before 8AM. 80% waggle after 8 PM. Loon chicks are last to leave lakes for winter migration. They stay on the ocean for 3-4 years, most returning to the home lake in their third year. Jim does not recommend introducing nesting rafts except in extreme conditions of nest failure. Rafts are most useful in situations with wake or water level fluctuations.

Thanks to all of you that help to protect loons and their habitat! 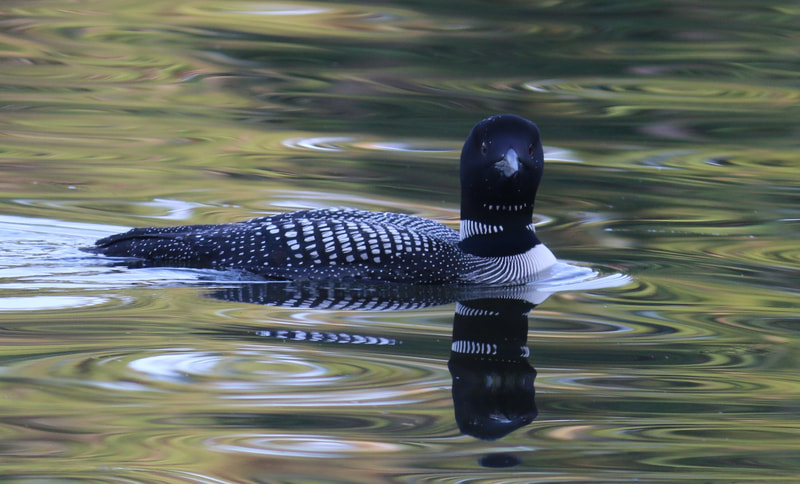